On 13 January 2016, SMF held its annual New Year Cocktail Reception at PARKROYAL on Pickering Singapore Hotel, where close to 300 maritime leaders from both public and private sectors attended the event dressed to the theme, ‘Nautical & Nice’.

The event commenced with an opening address by immediate past Chairman of SMF, Mr Michael Chia, where he summed up the key initiatives of SMF in 2015 and thanked partners for their support over the last year. Guest-of-Honour Mr Khaw Boon Wan, Coordinating Minister for Infrastructure and Minister of Transport gave an address next, highlighting the maritime and port performance for 2015 and announced some of the upcoming plans by the Maritime and Port Authority of Singapore (MPA) under the SkillsFuture framework.

In his speech as SMF’s new Chairman, Mr Andreas Sohmen-Pao urged the maritime community to remain close knitted, especially during these tough times, as SMF continues in its efforts towards furthering Singapore’s position as a leading maritime hub. He went on to introduce the Maritime Singapore Connect (MSC) Office, a new initiative undertaken by the SMF in 2016, to elevate current efforts to promote and profile the industry, and asked partners for their continued support. Mr Sohmen-Pao also took the opportunity to thank Mr Michael Chia, Mr Goh Teik Poh, Mr Patrick Phoon and Mr Wong Weng Sun who have stepped down from the SMF Board at the end of 2015, for their years of dedication to SMF.

It was an enjoyable evening of catching up with old friends and making new acquaintances over a scrumptious buffet spread and drinks. 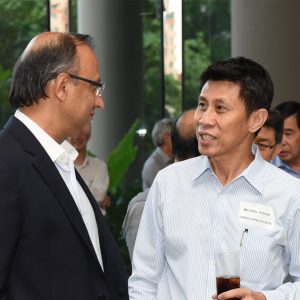 The Singapore Maritime Foundation (SMF) was established on 27 January 2004 to facilitate dialogue and cooperation among maritime stakeholders from the public and private sectors. As the bridge between the public and private sectors, SMF aims to provide the industry with a clear and representative voice, and spearhead projects to boost its development.

The Lloyd’s List Awards recognise achievements in the global maritime industry, rewarding successes and setting the benchmark for excellence.

The Maritime D/coded Tour is organised for undergraduates in NUS, NTU, SMU, SUTD and SIT who are majoring in Computing, Information Systems, Technology and Design, Business, Economics, Engineering, Science, Mathematics to find out more about how big data is used in vessel valuations and trade analysis as well as maritime careers that are relevant to your discipline.

SCMA co-hosted with Quadrant Chambers a tea talk on subject matters which were topical due to recent decisions in the Supreme Court. Four of their members were featured, Chirag Karia QC, David Semark, Michael Nolan QC and Yash Kulkarni.