SMF held its annual New Year Cocktail Reception at Regent Singapore Hotel on 11 January 2017. Over 200 maritime leaders from both the public and private sectors attended the event and guests were invited to come dressed in vibrant colours to show the industry’s diversity and vibrancy.

The event was graced by Mrs Josephine Teo, Senior Minister of State, Prime Minister’s Office, Ministry of Foreign Affairs and Ministry of Transport, as well as the newly appointed Chairman of the Maritime and Port Authority of Singapore (MPA), Mr Niam Chiang Meng.

The event commenced with an opening address by Mr Andreas Sohmen-Pao, Chairman of SMF. In his speech, Mr Sohmen-Pao highlighted some of SMF’s key initiatives such as the Maritime Singapore Connect (MSC) Office, the Singapore Maritime Ambassadors Programme (SG-MAP), as well as the upcoming SeaAsia 2017, a major biennial conference and exhibition that is set to take place in April this year.

Mr Sohmen-Pao also announced the maritime and port performance for 2016 and cited good growth momentum for Ship Registry as it maintained its position as the fifth largest ownership by flag. Singapore also kept its position as the world’s top bunkering port. In all, the SMF New Year Cocktail Reception provided guests with the opportunity to catch up with old friends and make new acquaintances over a sumptuous buffet spread. 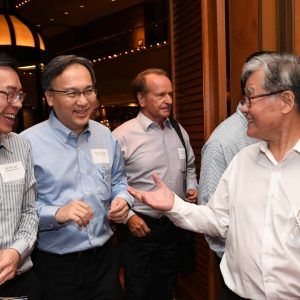 The Singapore Maritime Foundation (SMF) was established on 27 January 2004 to facilitate dialogue and cooperation among maritime stakeholders from the public and private sectors. As the bridge between the public and private sectors, SMF aims to provide the industry with a clear and representative voice, and spearhead projects to boost its development.

The Singapore Ship Sale Form was launched in response to Singapore’s and the Asian maritime community’s call for an alternative form that would cater to their needs, in view of increasing maritime activities and maritime arbitration cases in the region.

The MSC Connexions Forum was organised for stakeholders from the industry, government and school and training service providers to discuss HR issues pertaining to the maritime industry. The event kicked off with a personal sharing by Mr Jason Ho, Head, Group Human Resources, Overseas Chinese Banking Corporation Limited and Chairperson for the Engage and Outreach Committee under the Institute for Human Resource Professionals (IHRP).